The theme park is expected to open in 2020, same time when the Olympics opens in Tokyo. First opening will take place first in Japan, and then followed by similar rides at Universal’s parks in Los Angeles and Orlando.

The Nintendo press release came out and added more details on the topic:

“Super Nintendo World will be comprised of [sic] expansive and multilevel environments filled with unprecedented, state-of-the-art rides, interactive areas, shops and restaurants, all featuring Nintendo’s most popular characters and games.”

The attractions are far from being cheap to build. They added that of their calculations are correct, the entire project will need somewhere around £342m in British cash. It represents a high cost which means that the park should be more impressive than the old Mr. Blobby theme park from a few years ago.

The first concept art of the theme park is suggestive enough to make everyone curious and willing to join all the theme’s park experiences: 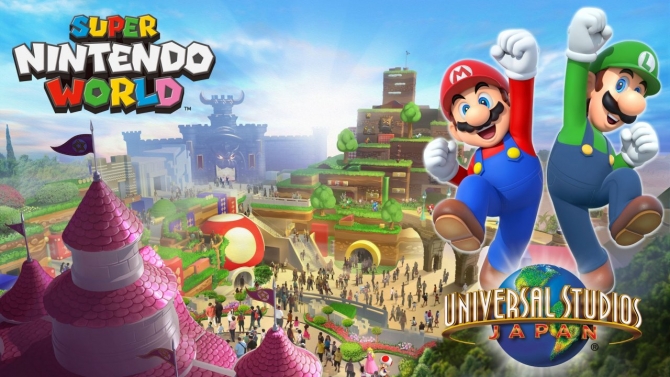 Even though the project is still in its early stages, the park is said to have a number of Nintendo-themed experiences that will make everything worth it.

“The immersive experiences will include major attractions at Universal’s theme parks and will feature Nintendo’s most famous characters and games,” the release states. “More details will be announced in the future, as the Nintendo and Universal creative teams work to create specific concepts.”

The announcement comes as Nintendo is making moves into different business areas; earlier this year, they announced their intention to move into the mobile gaming space. More than that, Nintendo was also seeking partnership with Sony in an attempt to make a movie based on its characters.

Even though Super Nintendo World is three years away, Universal’s already gathering the marketing materials to raise awareness.