Elon Musk posted a picture of the full spacesuit design for the first time, on Instagram, and it looks almost like a Stormtrooper from the Star Wars movies

It is believed that the suit was, indeed, designed by Marvel and DC movie legend Jose Fernandez. More than that, Musk has mentioned that it is “incredibly hard” to balance both the look and the function.

The suit features accents and lines that make it more stylish than all the other currents designs. In addition, it seems to be more tight-fitting than everything NASA has produced so far. 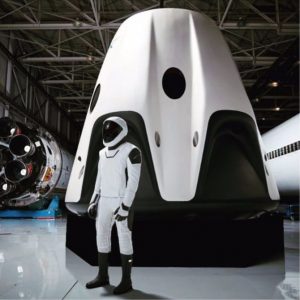 Worth noting that this actually works (not a mockup). Already tested to double vacuum pressure,’ Musk wrote in a caption

The suit was designed for NASA astronauts for the commercial crew program to wear when SpaceX starts taking people to and from the International Space Station. It is already known that SpaceX has been flying cargo capsules to the ISS for three years already, and is due to launch its first crewed mission with NASA in June, 2018.

More than that, the company also wishes to send two space tourists on a flight around the moon in 2018, which is definitely going to be something big.

When developing the suit, SpaceX chose to do it in-house, rather than partner with another party, as Boeing did with David Clark Company.

‘The most important part is that the suit will keep you alive. It is a lot lighter, more form-fitting and it’s simpler, which is always a good thing,’ astronaut Eric Boe said.